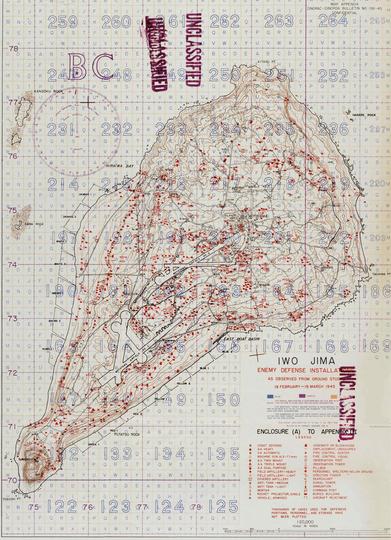 Even before the fall of Saipan in June 1944, Japanese planners knew that Iwo Jima would have to be reinforced significantly if it were to be held for any length of time, and preparations were made to send sizable numbers of men and quantities of materiel to that island. In late May, Lieutenant General Tadamichi Kuribayashi was summoned to the office of the Prime Minister, General Hideki Tōjō, and told that he had been chosen to defend Iwo Jima to the last. Kuribayashi was further apprised of the importance of this assignment when Tojo pointed out that the eyes of the entire nation were focused on the defense of Iwo Jima. Fully aware of the implications of the task, the general accepted, and by June 8, 1944, Kuribayashi was on his way to convert Iwo Jima into an impregnable fortress.

When he arrived, some 80 fighter aircraft were stationed on Iwo Jima, but by early July only four remained. A United States Navy force then came within sight of the island and bombarded it for two days, destroying every building and the four remaining aircraft.

Much to the surprise of the Japanese garrison on Iwo Jima, there was no American attempt to invade the island during the summer of 1944. There was little doubt that in time the Americans would attack, and General Kuribayashi was more determined than ever to exact the heaviest possible price for Iwo Jima, although the lack of naval and air support meant that Iwo Jima could not hold out indefinitely against an invader with sea and air supremacy.

By late July, Kuribayashi had evacuated all civilians from the island. Lieutenant General Hideyoshi Obata, commanding general of the 31st Army, early in 1944 had been responsible for the defense of Iwo Jima prior to his return to the Marianas. Following the doctrine that an invasion had to be met practically at the water’s edge, Obata had ordered the emplacement of artillery and the construction of pillboxes near the beaches. General Kuribayashi had a different strategy. Instead of attempting to hold the beaches, he planned to defend them with a sprinkling of automatic weapons and infantry. Artillery, mortars, and rockets would be emplaced on the foot and slopes of Mount Suribachi, as well as in the high ground to the north of Chidori airfield.

The reason for Kuribayashi’s departure from the water’s edge defense strategy, which had been the normal practice for the Japanese Imperial Army, was that he predicted that American air and naval bombardments would destroy any defenses on the beaches. It had been used at Saipan to great losses for the Japanese. For water’s edge defense to work, it needed support from the air and sea, none of which the Japanese Imperial Navy was capable of mounting at this point anymore. However, other military branches, especially the navy, were still insistent on the water’s edge defense and demanded that Kuribayashi see to it. In the end Kuribayashi had some pillboxes built at the beach as a token measure. The pillboxes were destroyed by American bombardment.

A prolonged defense of the island required the preparation of an extensive system of caves and tunnels, for the naval bombardment had clearly shown that surface installations could not withstand extensive shelling. To this end, mining engineers were dispatched from Japan to draw blueprints for projected underground fortifications that would consist of elaborate tunnels at varying levels to assure good ventilation and minimize the effect of bombs or shells exploding near the entrances or exits.

At the same time, reinforcements were gradually beginning to reach the island. As commander of the 109th Infantry Division, General Kuribayashi decided first of all to shift the 2nd Independent Mixed Brigade, consisting of about 5,000 men under Major General Kotau Osuga, from Chichi to Iwo Jima. With the fall of Saipan, 2,700 men of the 145th Infantry Regiment, commanded by Colonel Masuo Ikeda, were diverted to Iwo Jima. These reinforcements, who reached the island during July and August 1944, brought the strength of the garrison up to approximately 12,700 men. Next came 1,233 men of the 204th Naval Construction Battalion, who quickly set to work constructing concrete pillboxes and other fortifications.

On 10 August 1944, Rear Admiral Rinosuke Ichimaru reached Iwo Jima, shortly followed by 2,216 naval personnel, including naval aviators and ground crews. The admiral, a renowned Japanese aviator, had been crippled in an airplane crash in the mid-twenties and, ever since the outbreak of the war, had chafed under repeated rear echelon assignments.

For the remainder of 1944, the construction of fortifications on Iwo also went into high gear. The Japanese were quick to discover that the black volcanic ash that existed in abundance all over the island could be converted into concrete of superior quality when mixed with cement. Pillboxes near the beaches north of Mount Suribachi were constructed of reinforced concrete, many of them with walls four feet thick. At the same time, an elaborate system of caves, concrete blockhouses, and pillboxes was established. One of the results of American air attacks and naval bombardment in the early summer of 1944 had been to drive the Japanese so deep underground that eventually their defenses became virtually immune to air or naval bombardment.

While the Japanese on Peleliu Island in the Western Carolines, also awaiting American invasion, had turned the improvement of natural caves into an art, the defenders of Iwo developed it into a science. Because of the importance of the underground positions, 25% of the garrison was detailed to tunneling. Positions constructed underground ranged in size from small caves for a few men to several underground chambers capable of holding 300 or 400 men. In order to prevent personnel from becoming trapped in any one excavation, the subterranean installations were provided with multiple entrances and exits, as well as stairways and interconnecting passageways. Special attention had to be paid to providing adequate ventilation, since sulphur fumes were present in many of the underground installations. Fortunately for the Japanese, most of the volcanic stone on Iwo was so soft that it could be cut with hand tools.

General Kuribayashi established his command post in the northern part of the island, about 500 m northeast of Kita village and south of Kitano Point. This installation, 20 m underground, consisted of caves of varying sizes, connected by 150 m of tunnels. Here the island commander had his own war room in one of three small concrete enclosed chambers; the two similar rooms were used by the staff. Farther south on Hill 382, the second highest elevation on the island, the Japanese constructed a radio and weather station. Nearby, on an elevation just southeast of the station, an enormously large blockhouse was constructed which served as the headquarters of Colonel Chosaku Kaidō, who commanded all artillery on Iwo Jima. Other hills in the northern portion of the island were tunnelled out. All of these major excavations featured multiple entrances and exits and were virtually invulnerable to damage from artillery or aerial bombardment. Typical of the thoroughness employed in the construction of subterranean defenses was the main communications center south of Kita village, which was so spacious that it contained a chamber 50 m long and 20 m wide. This giant structure was similar in construction and thickness of walls and ceilings to General Kuribayashi’s command post. A 150 m tunnel 20 m below the ground led into this vast subterranean chamber.

Perhaps the most ambitious construction project to get under way was the creation of an underground passageway designed to link all major defense installations on the island. As projected, this passageway was to have attained a total length of almost 27 km (17 mi). Had it been completed, it would have linked the formidable underground installations in the northern portion of Iwo Jima with the southern part of the island, where the northern slope of Mount Suribachi alone harbored several thousand yards of tunnels. By the time the Marines landed on Iwo Jima, more than 18 km (11 mi) of tunnels had been completed.

A supreme effort was required of the Japanese personnel engaged in the underground construction work. Aside from the heavy physical labor, the men were exposed to heat from 30–50 °C (86–122 °F), as well as sulphur fumes that forced them to wear gas masks. In numerous instances a work detail had to be relieved after only five minutes. Renewed American air attacks struck the island on 8 December 1944 and became a daily occurrence until the actual invasion of the island. Subsequently, a large number of men had to be diverted.